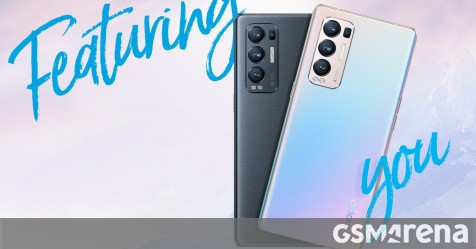 The Oppo Reno5 Pro+ 5G was has been rumored to arrive overseas for over a month, and the phone has finally made it. Its first global market will be the Middle East, as Oppo Arabia set a launch date of March 16.

However, the phone with the telephoto lens will be called Oppo Reno5 Pro 5G, there is no Plus sign in the moniker.

The Reno5 Pro+ 5G is different from its non-Plus sibling despite their similar looks. It has a Snapdragon 865 chipset and a 13 MP telephoto camera, tucked behind the upper right lens. Other specs include a 50 MP Sony IMX766 main sensor and a 16 MP ultra-wide-angle camera.

The battery of the Arab version of Reno5 Pro 5G is 4,500 mAh with 65W fast-charging, courtesy of SuperVOOC 2.0, and there is some reverse charging as well. There’s no info on how much would the phone cost, but we’ll know once it launches in these five countries first – the Arab Emirates, Oman, Qatar, Kuwait, and Bahrain.