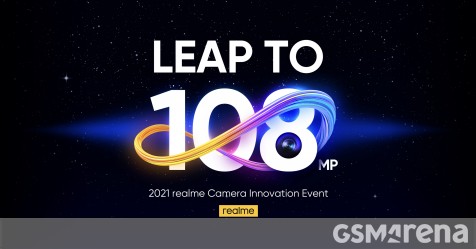 For the second year in a row, Realme is hosting a Camera Innovation Event. Last year the brand showcased its first 64MP quad cam phone using Samsung’s ISOCELL Bright GW1 module and this year we get to see the first 108MP camera which will debut with the upcoming Realme 8 series. The sensor in question is Samsung’s ISOCELL HM2 with 9 to 1 pixel binning tech and up to 3x lossless zoom.

The ISOCELL HM2 is a 1/1.52” sensor with 0.7 μm pixel size and Super-PD autofocus. It can shoot stills at up to 12000×9000 pixel resolution and record videos up to [email protected] fps. Realme has developed several custom optimizations to the sensor which will be present on the upcoming Realme 8 Pro.

The 3x in-sensor lossless zoom helps preserve details and colors without over-sharpening by taking 12MP photos and mapping the zoomed area. The image processing here is tweaked to take eight consecutive 12MP shots which are then enhanced with the aid of an algorithm to increase clarity. Realme claims this process is superior to that of some telephoto modules in terms of sharpness.

The 108MP sensor also comes with a new Starry Mode for astrophotography time-lapse videos. Traditionally these forms of videos are made by recording multiple clips with professional cameras which are then edited on a computer. Realme is substituting the process by implementing its own time-lapse video algorithm. It shoots 30 photos across 480 seconds (8 minutes) which then results in a 1s time-lapse video and the process is repeated for the desired end result.

Another Realme addition to the ISOCELL HM2 is Tilt-shift time-lapse video which uses an algorithm to capture tilt-shift photos and videos. These shots simulate a miniature world by keeping parts of the image out of focus. The new camera mode will allow you to select the angle, position and bokeh size directly from the camera settings and will also be able to add transition effects between blurred and clear areas. The Realme 8 Pro will be the first smartphone with tilt-shift video capture.

Last but not least we get a teaser of the Realme 8 Pro’s back with its four camera sensors sitting on a square island. The back has a slight curvature and Dare to Leap branding with a satin-like finish.